In One Vote Away, you will discover how often the high court decisions that affect your life have been decided by just one vote. One vote preserves your right to speak freely, to bear arms, and to exercise your faith. One vote will determine whether your children enjoy their full inheritance as American citizens.

God may endow us with “certain unalienable rights,” but whether we enjoy them depends on nine judges—the “priests of the robe” who have the last say in our system of government. Drawing back the curtain of their temple, Senator Cruz reveals the struggles, arguments, and strife that have shaped the fate of those rights. No one who reads One Vote Away can ever again take a single seat on the Supreme Court for granted.

Senator Ted Cruz has represented Texas in the United States Senate since 2013. Cruz is a former prosecutor and Supreme Court clerk under William Rehnquist. With the recent passing of Juice Ruth Bader Ginsberg, Cruz’s new book, One Vote Away: How a Single Supreme Court Seat Can Change History, gives his account on why judicial selection to the nation’s highest court is so important.

Heading into the 2020 presidential election, the control of the Supreme Court, and with it the fate of the Constitution, hands in the balance. Senator Cruz’ essential and timely book takes readers behind the curtain of America’s Highest Court and shows just how one more Justice on either side can preserve the country’s liberty – or destroy them.

In my book, I make the case for why filling the vacancy left by Justice Ginsburg is so important. On so many issues, we are just one vote away from losing our liberties — such as religious liberty and our right to keep and bear arms — and seeing our country fundamentally changed.

I examine eight critical constitutional issues and landmark Supreme Court cases that every American should know about, such as Van Orden v. Perry, a landmark religious liberty case, District of Columbia v. Heller, which affirmed our Second Amendment right to keep and bear arms, and Gonzales v. Carhart, where the Supreme Court upheld the federal ban on the gruesome practice of partial-birth abortion. Most of the cases I write about in the book were decided by just one vote. Almost all of them I helped litigate, and I aim to explain what really happens at the Supreme Court when our constitutional rights are at stake.

And in a matter of weeks, the result of this presidential election could come down to the court. If the election results are challenged, a four-four court can’t decide anything. We need a full Court on Election Day, given the high likelihood we’re going to see litigation that goes to the court. We need a nine justice Supreme Court that can give a definitive answer for the country.

When it comes to our fundamental rights and contentious policy issues, we are one vote away from either upholding the Constitution and preserving our liberties or destroying them.

For ourselves and for posterity, we have a solemn obligation not to let that happen.

One Vote Away: Official Book Summary

With Justice Ruth Bader Ginsburg’s sudden passing, control of the Supreme Court—and with it the fate of the Constitution—has become the deciding issue for many voters in the 2020 presidential election. And the stakes could not be higher.

With a simple majority on the Supreme Court, the left will have the power to curtail or even abolish the freedoms that have made our country a beacon to the world. We are one vote away from losing the Republic that the Founders handed down to us. Our most precious constitutional rights hang by a thread.

Senator Ted Cruz has spent his entire career on the front line of the war to protect our constitutional rights. And as a Supreme Court clerk, solicitor general of Texas, and private litigator, he played a key role in some of the most important legal cases of the past two decades.

In One Vote Away, you will discover how often the high court decisions that affect your life have been decided by just one vote. One vote preserves your right to speak freely, to bear arms, and to exercise your faith. One vote will determine whether your children enjoy their full inheritance as American citizens.

God may endow us with “certain unalienable rights,” but whether we enjoy them depends on nine judges—the “priests of the robe” who have the last say in our system of government. Drawing back the curtain of their temple, Senator Cruz reveals the struggles, arguments, and strife that have shaped the fate of those rights. No one who reads One Vote Away can ever again take a single seat on the Supreme Court for granted.

One Vote Away: How a Single Supreme Court Seat Can Change History Book Reviews

Here are some reviews from readers.

“Love or hate him, Ted Cruz is exceptionally brilliant and an excellent write and debator. This book release is incredibly timely considering the most recent passing of Justice Ginsberg. If you’re interested in the judicial branch of our government, and how one person can truly change the world, you’ll enjoy this book. Cruz makes excellent points and paints a descriptive picture for the reader on the importance of a SCOTUS nomination.”

“Senator Cruz brilliantly illustrates, through a myriad of personal fights he’s experienced, just how important nominating the right people for the Supreme Court is. With each topic he gives an example of a case from history as well as one that is recent. He also tells some behind the scenes stories from the 2016 campaign through to the writing of this book. Probably the best “tell all” of the Trump administration.”

“Every book Ted Cruz has written has been excellent, in fact they get better and better! This book is timely and exceptional. The Supreme Court should interpret law, not create it. Wrestling the Courts away from the Left that has used it to force their agenda on an electorate that won’t vote for it, should be a top priority for the people of the United States! Republican leaders must make nominations of those who will interpret law as written…and don’t give in! Great book!”

“Worth the read no matter which side of the aisle you’re on. A good insight into the litigation of important SCOTUS cases which have defined the direction of our country.”

“Because it is such an important issue for the never Trumpers to understand. We have too many people that believe in what fake news tells them and are too ignorant to realize what is happening right under their noses that will change our country forever and take away our 2nd amendment. We are “one vote away” and it’s something people need to read or we lose our country forever!”

“Our Supreme Court is, by far, one of the best thing this country has. We sometimes take it for granted and don’t realize just how much our country could have, and could in the future, be changed but just one single vote! A very interesting topic.”

“Very informative and well written. A must read for anyone wanting a better understanding of what is happening in today’s political world.”

“Just bought this book and half way through it. Great insider information on the operation of the Supreme Court and the nomination process. Highly recommended.”

“This book is an essential read for all Americans. It details how close SCOTUS decisions come to taking away constitutional rights. Senator Cruz has written a book easy for the lay person to understand.”

“Everyone who cares about our country should read this. It is heartfelt. Last night I tearfully read the introduction and the jacket. I’m amazed at what a great writer this great man is. It is an easy read. I will add to this review when I finish the book. I got it on kindle as well as the hard copy so that I can keep reading with more convenience and to keep it permanently in my library. Even though I am a huge Trump supporter, I voted for Cruz in the primary in 2016. He might be Trump’s replacement in 2024. Of course, the left wing mob/communists don’t like this book. This is expected and says who they are. Us.”

“I was captivated by the personal stories and view into the workings of the highest court in the land presented in this book. If you want to know just how profoundly this court affects our rights and freedoms, by specific cases and examples, this is the book for your. The book is organized by our rights and the cases that have most affected them. Now it is more vital than ever that we understand the workings of the SCOTUS and how narrow a margin each case is usually decided by and how close our rights are from being overridden by the court. A must read for every American!”

“Great book, easy read, helps to understand why Supreme Court so important. Just kind of scary with what is going on right now. Each Justice is so important!!” – Marilou Boggs
“There is such a richness of detail to these cases that is never mentioned in the “popular” press. This is a behind the scenes glimpse of how liberals have been working to subvert the constitution while pretending they support it. And how conservatives fight back with intelligent and fact based arguments that defend out liberties. Cruz writes in an easy to understand voice with compelling, detailed and supported explanations for some of the most impactful Supreme Court cases in recent times. He was there arguing many of them and has first hand information. It also shows a depth of scholarship from TC that I had not previously been aware of. Again media characterizations of TC do an injustice to his love for our country, his passion for equal justice under law and his determination to be a fighter on capital hill to prevent subversion of our rights by the government.” 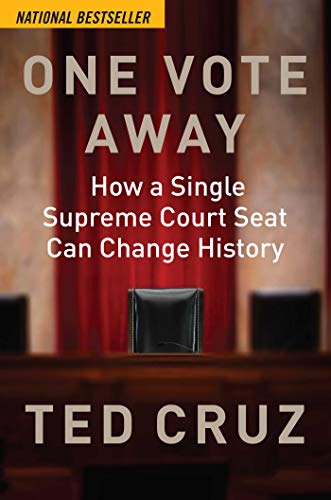