Woodward’s first book on Donald Trump, Fear – Trump in the White House was released almost a year to the date of Woodward’s latest book. As with his first book, the title of his latest publication is derived from a conversation that Woodward had with Trump in March 2016, “I bring rage out. I do bring rage out. I always have… I don’t know if that’s an asset or a liability, but whatever it is, I do. I also bring great unity out, ultimately. I’ve had many occasions like this, where people have hated me more than any human being they’ve ever met. And after it’s all over, they end up being my friends. And I see that happening here.”

One of the key differences between the two books is that for the first book, Woodward worked using outside sources, never talking to the president. Apparently, Trump aides felt it would be better if he did not talk directly to Woodward. However, for this second book, the president insisted on being interviewed. The president consented to 18 interviews lasting 9 hours. The interviews took place in the Oval Office and at night on the telephone.

The interviews provide a vivid window into Trump’s mind. Much of the first part of Rage deals with Trumps relations with former Director of National Intelligence Dan Coats, former Defense Secretary James Mattis, and former Secretary of State Rex Tillerson. The balance of the book deals with Trump’s mishandling of the government’s response to the COVID-19 pandemic. Further, Woodward obtained 25 never-seen personal letters exchanged between Trump and North Korean leader Kim Jong Un, who describes the bond between the two leaders as out of a “fantasy film.”

Since the interviews were all recorded, it is difficult to claim that Woodward twisted Trump’s words; however, even actual recordings of his voice do not prevent Trump supporters from claiming that the president was misquoted.

Ultimately, Woodward addresses the question of Trump’s fitness for office. As Woodward concludes his book:

Elsa [Woodward’s wife] suggested looking at a previous president who wanted to speak directly to the American people, unfiltered through the media, not just during troubling times but during a major crisis. The model was Franklin D. Roosevelt. Over his 12 years as president, FDR gave 30 fireside chats. His aides and the public often clamored for more. FDR said no. It was important to limit his talks to the major events and to make them exceptional. He also said they were hard work, often requiring him to prepare personally for days.

The evening radio addresses concerned the toughest issues facing the country. In a calm and reassuring voice, he explained what the problem was, what the government was doing about it, and what was expected of the people.

Often the message was grim. Two days after Japan’s December 7, 1941, surprise bombing attack on Pearl Harbor, FDR spoke to the nation. “We must share together the bad news and the good news, the defeats and the victories– the changing fortunes of war. So far, the news has been all bad. We have suffered a serious setback.” He added, “It will not only be a long war, it will be a hard war.” It was a question of survival. “We are now fighting to maintain our right to live among our world neighbors in freedom and common decency.”

FDR invited the American people in. “We are all in it–all the way. Every single man, woman and child is a partner in the most tremendous undertaking of our American history.” Japan had inflicted serious damage and the casualty lists would be long. Seven-day weeks in every war industry would be required.

“On the road ahead there lies hard work–grueling work–day and night, every hour and every minute.” And sacrifice, which was a “privilege”….

…For nearly 50 years, I have written about nine presidents from Nixon to Trump–20 percent of the 45 U.S. presidents. A president must be willing to share the worst with the people, the bad news with the good. All presidents have a large obligation to inform, warn, protect, to define goals and the true national interest. It should be a truth-telling response to the world, especially in crisis. Trump has, instead, enshrined personal impulse as a governing principle of his presidency.

When his performance as president is taken in its entirety, I can only reach one conclusion: Trump is the wrong man for the job.

Woodward, the #1 international bestselling author of Fear: Trump in the White House, has uncovered the precise moment the president was warned that the Covid-19 epidemic would be the biggest national security threat to his presidency. In dramatic detail, Woodward takes readers into the Oval Office as Trump’s head pops up when he is told in January 2020 that the pandemic could reach the scale of the 1918 Spanish Flu that killed 675,000 Americans.

In 17 on-the-record interviews with Woodward over seven volatile months—an utterly vivid window into Trump’s mind—the president provides a self-portrait that is part denial and part combative interchange mixed with surprising moments of doubt as he glimpses the perils in the presidency and what he calls the “dynamite behind every door.”

At key decision points, Rage shows how Trump’s responses to the crises of 2020 were rooted in the instincts, habits and style he developed during his first three years as president.

Revisiting the earliest days of the Trump presidency, Rage reveals how Secretary of Defense James Mattis, Secretary of State Rex Tillerson and Director of National Intelligence Dan Coats struggled to keep the country safe as the president dismantled any semblance of collegial national security decision making.

Rage draws from hundreds of hours of interviews with firsthand witnesses as well as participants’ notes, emails, diaries, calendars and confidential documents.

Woodward obtained 25 never-seen personal letters exchanged between Trump and North Korean leader Kim Jong Un, who describes the bond between the two leaders as out of a “fantasy film.”

“I was not going to read this. Not another Trump book. Alas, my friends, I am weak. I won’t get too much into the details, because, honestly, the book contains little that would surprise you at this point. What is astonishing, however, is that Trump allowed Woodward to record all the imbecilic, narcissistic things he said in all manner of crises. He made time to chat with a journalist for hours on end to pump up his ego, while a war with Iran was not out of the question, people were protesting racial injustice outside the White House, people were dying by the thousands from a disease that could have been controlled, etc. A further recurring theme of the interviews is that he is NUMBER ONE! On Twitter, on Facebook, number one for African Americans, number one in planning for Covid, number one for the economy, and on and on it goes. More than once, I thought he sounded like a spoilt child that always has to win, and who has indulgent parents (in form of cowardly senators) who give him a lot of merit trophies to avoid having to deal with too bad a tantrum. I can’t comment much on whether Woodward should have come forward with his information sooner, because as far as I could judge, it wouldn’t have changed much. I could go on, but all that I can say that really matters is VOTE! VOTE! VOTE! VOTE! We can do better than this.” – Malia

“Fascinating, scary, bewildering, jaw dropping. I feel sorry for America to see this man child destroy his own country through utter ignorance and chronic narcissism. I read this book after reading ‘Fear’ by Bob Woodward, I highly recommend both books. Jared Kushner is quoted as saying, ‘Understanding Trump meant understanding Alice in Wonderland’.” – Simon Gibson

“I’m giving this book 5 stars because Woodward did the best job of reporting on the current administration of any author I’ve read so far. Unlike many of the memoirs that have been published in the last 3 years, Woodward actually had 17 recorded conversations with Trump and has verbatim quotes. He also talked to other people in the administration, including Jared Kushner and many unnamed sources.

There is a great deal of detail about the meetings between Trump & Kim which was new information for me as well. Prior to publication, we heard that Trump knew that CoVid-19 was much more serious than the ordinary flu and Woodward gives the details of these conversations with Trump.

It’s worth a read even if you are a news junkie and have been keeping up with the daily news cycle the last 4 years.” – Susan

“Although the juiciest parts of the book (along with the audio tapes) have been out for over a week now, the book still packs a punch, as all of the author’s books do. Full of insider (you can’t get more insider that POTUS) information, the author chronicles the current Administration’s fights, feuds, potential felonies and more. Not sure why POTUS thought he could charm the author, but it didn’t work, and what you get is straight from the horse’s mouth.” – R. Patrick Baugh

“Veteran journalist Bob Woodward once again proves that he is still very much on top of his game. As ever, he remains scrupulously objective in his well-researched and insightful reporting, here allowing Trump his full say to lay out all his own inadequacies in his own words. Am I actually surprised by anything revealed within these pages? No. Surely we all know to expect the worst when it comes to Trump, the incoherent babble that comes out of his mouth, and the incompetence and endless blundering that comes out of his office. Do I think this is what will tilt the balance in favour of his opponent in the upcoming election? Well… also, no. If people still haven’t understood that, as Woodward so succinctly concludes in this book, “Trump is the wrong man for the job”, no amount of facts and arguments will change that at this point. Doesn’t make this any less of an important and highly recommended book.” – Denise

“Yes, you’ve probably heard the most stunning quotes already, but when all strung together in context they become constitutionally frightening. Interviews conducted through the last days of July. Trump is a narcissistic, dangerous person. The fact that he also has the nuclear codes should put the whole world on edge. God help us.” – Donna

“As usual, Woodward is great. He tells you what happened and lets you decide. And it’s incredibly enlightening to see that Trump sounds almost exactly the same when talking to Woodward on tape, as he does ranting in front of his crowds. The denial, the braggadocio, the cherry picking of facts at best, and outright lies at worst. You’d think he’d know better than to just tell bald faced lies that are easily verifiable as lies to a reporter like Bob Woodward. But he can’t . He has no self control. And we’re in deep trouble if he’s re-elected. And talk about focusing on the wrong things, he spends a hell of a lot of time bragging about how much Kim Jong Un likes him. Because no matter who you are, the only thing that seems to matter to Trump is whether you like him. And that comes through loud and clear from his own words on tape, not from any spin from Woodward.” – Craig 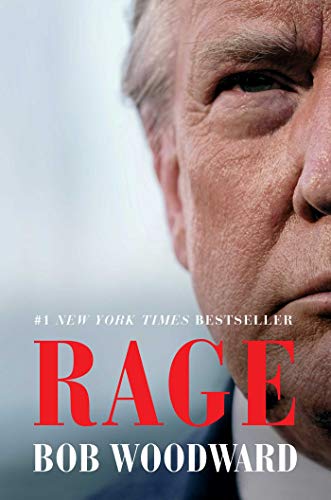